Order before midday for next day delivery

My name is Neil McMahon and I am a keen conservationist and birdwatcher living in Northamptonshire. Since my childhood I have maintained wild bird feeding stations in gardens, fields, woodland and nature reserves in the county north of Northampton. In addition to feeding common birds I have always been keen to provide food for those species which during the last few decades have struggled nationally or regionally and the provision of food is likely to make the difference. Like much of middle England, Northamptonshire is a county dominated by agriculture as the most significant land usage and national assessments indicate that many species associated with this habitat have suffered persistent population declines.

Such species includes the Yellowhammer which is believed to suffer particularly during the ‘hunger gap’ when natural food is very limited during the latter end of the winter and into spring. Another is the Tree Sparrow which has been declining throughout the south-east of the UK but with colonies still present around feeding stations in Northamptonshire. Local and regional birds are supplemented by Tree Sparrows from the north-east (where they are doing well in the summer but migrate south to find food in the winter). So not surprisingly I manage feeding stations in open field settings for such species although Tree Sparrows have learnt to feed from suspended feeders too. And of course whilst doing so a raft of other species benefit including a range of finches, Reed Buntings etc. 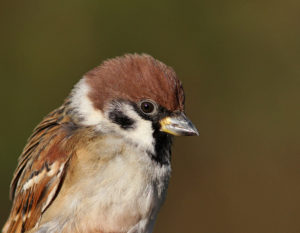 The woodland feeding stations also attract plenty of finches, tits, woodpeckers and Nuthatches and historically the much scarcer Willow and Marsh Tits and of course gardens are the domain of many species including large numbers of Goldfinches, tits, thrushes and Starlings.

Hygiene is critical when feeding birds so it is important that all suspended feeders are cleaned regularly and a ground or broadcast feeding site is varied so that there is not a build up of disease or soil deterioration due to discharge.

As a result of our long term feeding commitment we have bucked the trend and have a vibrant and stable population of Yellowhammers, still feed large numbers of Tree Sparrows and our feeding stations are full of colour, sound and feather. Three winters ago an assessment of one feeding station suggested that it was providing supplementary food for up to five hundred Yellowhammers. 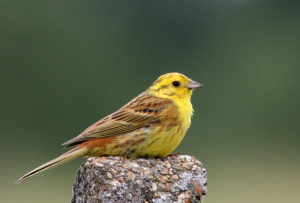 All this has been possible due to the quality feed provided by Eyebrook Wild Bird Feeds which provides the bulk and diversity that we require to nourish and sustain our target species as well as over fifty species of more common birds.

This autumn has been interesting with a mixture of cool and warm temperatures and is also the best autumn locally for the migrant finch the Brambling. At one of the feeding stations we have been feeding hundreds of these nomadic and very beautiful finches and it’s been a job to keep up with the feeding frenzies! 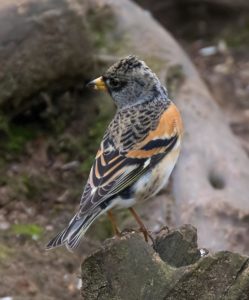 Most species will feed on more than one type of available food provided by Eyebrook Wild Bird Feeds and it is interesting to see that seasonally and annually the preferential choice may change.

I feel that our joint efforts really are making a difference to those populations which suffer from a lack of natural food at critical times and with the winter weather on our doorstep our feeding initiatives will be at our busiest!

Join us at Rectory Farm for the last bird watching tours of the season!

Find us on social media

We had a fantastic evening with our local Squirrel

Visit us at Blaston Show today for a great country

A beautiful sight on the wild flowers this morning

A very big THANK YOU to the wonderful team at @no

It's Fathers Day today and all the dads at Rectory

How it all works

You can find out more about which cookies we are using or switch them off in settings.

This website uses cookies so that we can provide you with the best user experience possible. Cookie information is stored in your browser and performs functions such as recognising you when you return to our website and helping our team to understand which sections of the website you find most interesting and useful.

Strictly Necessary Cookie should be enabled at all times so that we can save your preferences for cookie settings.

If you disable this cookie, we will not be able to save your preferences. This means that every time you visit this website you will need to enable or disable cookies again.

This website uses Google Analytics to collect anonymous information such as the number of visitors to the site, and the most popular pages.

Please enable Strictly Necessary Cookies first so that we can save your preferences!